Setting and growth mindset – are they really mutually exclusive?

At the start of half term, I read Debra Kidd’s blog post on setting and I’ve returned to thinking about it ever since, mainly for two reasons:

Essentially, this post made me feel torn. Everything Debra explained made sense to me as I read it and yet my reality has been different.

Let me explain. We set for maths in my school. It almost feels like a bad thing to admit these days, but there we go, we do. For the last two years, since I’ve been there, I have taken the year 6 group who struggle with maths – coming up to year 6 working at level 2 or 3, in old money. And, for the last two years, we have had 100% of year 6 achieve level 4 in maths and a percentage significantly above national got in level 5 and 6 maths too.

Now here’s the thing. This was not a case of me just aiming to drag the kids in my group up to achieving a 4C and be done with it for data’s sake. The truth is, several of my group each year have gone on to achieve level 5.

I’m also sure some people may be reading this saying well that’s all well and good, but it’s not all about the test how, how happy were they? etc. For this, I don’t have data (although that would be interesting), but I will say that I see their attitudes to maths change for the better and have lost count of the number of parents who have taken the time to tell me that their child was/is more confident in maths. At parents evening, just before half term, a mum came to find me to tell me that her daughter is liking maths this year.

Of course this is all sounds like major trumpet blowing, and while I’m very proud of what my maths groups have achieved over these past two years, that wasn’t really my intention for this post. The point I really want to make is that when it comes to setting, I think you can still have a growth mindset. You don’t have to aim to scrape through at best because some students are struggling at the beginning of the year. I’ve never capped any child at achieving level 4 because they were in my group. For the most part, though it often takes them a bit longer, they begin to realise their potential over the year too.

Having this group of children in a small set allows me to really target the gaps in their knowledge and have high expectations for them all. No one slips under my radar. It’s rare that I have to think, “ok, well 95% have got it, so let’s move on.” It enables me to help everyone to get it, most of the time. We do the same work as the rest of year 6, but sometimes in a different way and the atmosphere is very open and honest and if we don’t get something we say and we focus on it – and I don’t mean to suggest you can’t create this atmosphere in a mixed maths class. It just seems to work for my children.

This is not research, it’s not robust evidence, but it is mine and my pupils’ experiences of setting and I think it is possible to set and support the idea of growth mindset. 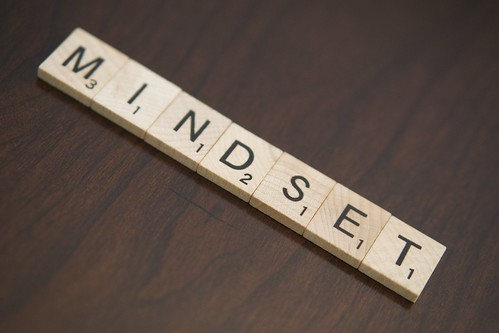